Change is now commonplace in the commercial mailbox industry which is why it should come as no surprise of the most recent happenings. The recent acquisition of the troubled American Locker Group by the private equity firm Anderson Group caused the company to struggle for years with having a firm identity and lack of product diversification in the marketplace. American Locker Group now owned by Anderson Group, LLC (once a leader in pedestal mailboxes) will be fortunate to keep the doors open in 2015. How did this fall of the once highly regarded stock on the NYSE happen? What opportunities will the other manufacturers have as a result of American Locker’s misfortune? Where will the centralized mailbox marketplace go as we move through the 21st Century? 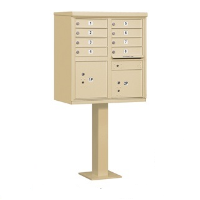 The result of the change to a more secure cluster box unit now known as the F Series cluster box unit put the other manufacturers in the industry in the spot of playing catch up to Florence Manufacturing while still trying to run their current operations. Because cluster box unit represented a significant portion of American Locker’s revenue this task proved to be extremely difficult and USA Building Supplies’ management believes was the paramount reason to the recent acquisition by Anderson Group of the troubled American Locker.

The Start of Mini Storage Cabinets

Will additional opportunities come about for the current commercial mailbox manufacturers because of American Locker’s hard times? Yes, but some of these opportunities have already been realized. One complementary line that American Locker enjoyed great success with was a product called mini check lockers, which was used predominantly in health clubs for small article storage. The revolution of electronic devices increased the use of the mini check lockers to include the storing cell phones. Florence manufacturing took advantage of this trend by introducing mini storage lockers, which is a more versatile locker than American Locker’s mini check locker. Today, Florence Manufacturing is the leading producer of cell phone lockers in the USA. Another product American Locker enjoyed some success with was a specialty locker called a laptop locker. Manufacturers from other related industries have entered into this segment of the market too. It would not be a surprise if Florence Manufacturing or other commercial mailbox companies introduced their own laptop locker shortly.  Additional opportunities in the commercial mailbox industry as a result of American Locker difficulties include Federal Express horizontal mailboxes, ups store mailboxes, and university mailboxes as American Locker enjoyed a significant portion of these niches of the centralize mailbox marketplace.

Current commercial mailbox manufacturers have been watching the American Locker situation unfold carefully and are trying to learn from it. Product diversification and business acquisitions are almost a certainty to be a part of their plan moving forward. Top industry insiders see manufacturers like Florence and Salsbury continually diversifying to decrease their dependence on their bestselling product lines which are currently cluster box units and 4C mailboxes. In conclusion it has become apparent that manufacturers and distributors in the commercial mailbox marketplace would be served moving into the future by continually evolving to avoid the pitfalls that American locker has fallen into.

Back To Building Supplies Menu

USA Building Supplies can put together a quote to meet your exact specifications and requirements.